The Court of Appeal has allowed an appeal from a decision by the Vice-President of the Court of Protection to discharge a mother as a party to proceedings concerning her highly vulnerable 19-year-old daughter (P).

A few days prior to a hearing on 3 November 2020 the local authority and the NHS trust involved in the case had received information which, if correct, indicated that P was at risk of further harm. They disclosed this information – which indicated amongst other things that P had been sexually abused by the appellant’s partner and that P had told the appellant about the abuse but the appellant did not believe her – to the Official Solicitor and to the court but not to the appellant or her solicitors.

In the light of the information, the local authority, the Official Solicitor and the Trust made a joint application to the Court to hold part of the forthcoming hearing in private, excluding the appellant and her lawyers, and to prohibit any further contact between the appellant and P.

No formal notice of this application was given to the appellant or her legal representatives, although her leading counsel, Mr Timothy Nesbitt QC, was informed by the local authority shortly before the start of the hearing that an application would be made to exclude him and his client from part of the hearing.

At the conclusion of that part of the hearing Mr Justice Hayden stated that having heard from counsel he had “come to the conclusion that contact between P and her mother is for the present inimical to her best interests”, and he made such a declaration pursuant to s16. “In the circumstances I consider that [the appellant] no longer needs to be a party to the proceedings, and therefore I plan to discharge [the appellant]. To do otherwise would compromise P's privacy at this point,” the Vice-President added.

In P (Discharge of Party), Re [2021] EWCA Civ 512 (16 April 2021) Lord Justice Baker described the circumstances in which the appellant mother was discharged by Mr Justice Hayden as a party as “highly unusual”.

The Court of Appeal judge said: “The order was made by the Court on its own initiative, without an application by any party. The appellant was given no notice that the order was going to be made, no notice of the evidence on which the Court relied when making the order, and no opportunity to make representations before it was made. No judgment was delivered at the hearing on 3 November [2020] and the appellant was given hardly any indication of the reasons why the order was made.

“At the same time as making the order, the judge directed that, if the appellant wished to make any representations in respect of the order, she should do so within three days, by 6 November. Despite having no copy of the order, nor any notice of the evidence supporting or the reasons for the order, the appellant's lawyers complied with that direction. A fortnight later, having heard nothing from the Court, they sent an email asking when they might expect a decision following the filing of their submissions. In reply to a further email dated 27 November, they received an email from the judge's clerk stating that the judge was unclear what they were inviting him to do and that, if they wished to make an application, he would try to accommodate it. On 8 December, the appellant's solicitors filed a notice of application asking for a judgment relating to or reasons for the order dated 3 November and any further decision made in the light of the submissions filed on 6 November. The second order under appeal, adjourning the application for a judgment, was made in response to that application.”

Lord Justice Baker said the principal explanation for the Vice President adopting “this highly unusual, if not unique, course” was that the other parties to the proceedings had disclosed information to the court without notice to the appellant and the judge concluded that, if the information was disclosed to the appellant, there was a risk that P would suffer serious harm.

Allowing the appeal, the Court of Appeal judge, with whom Lord Justice Warby and Lord Justice Peter Jackson agreed, said: “Given the serious concerns about the harm allegedly suffered by P and the risk of future harm, the judge was entitled to consider the matter in the first instance without notice to the appellant and to withhold evidence from her. He would have been fully entitled to make the order which the respondents were asking for, suspending contact between P and the appellant for a limited period, probably measured as a few weeks in the first instance, to allow the parties to reflect.

“In my judgment, however, he plainly went too far by discharging the appellant as a party without giving her the opportunity to make representations and by failing to consider alternative procedures which might have protected P's best interests whilst limiting the infringement of the appellant's rights. I see no reason to doubt that he considered the written representations subsequently filed on the appellant's behalf, but in my judgment he ought to have provided reasons for his decision, albeit in brief terms, and was wrong to adjourn indefinitely the application for a judgment.”

The case is understood to have been the first in which a special advocate was instructed in the Civil Division of the Court of Appeal, to represent the appellant in the closed part of the hearing. The judgment sets out a description of how the Court of Appeal proceeded "in these unusual circumstances" with a view to assisting in any future proceedings of this kind which require a form of closed procedure.

Paying for sex and the Court of Protection 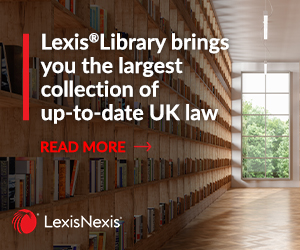 What Next? Residential Property Law in 2021/22 - Landmark Chambers

Possession proceedings, where are we now? - Cornerstone Barristers