The Court of Appeal has granted the Department of Health and Social Care permission to appeal a key ruling on the issue of ‘ordinary residence’ for the purposes of s.117(3) of the Mental Health Act.

The main issue in R (Worcestershire County Council) v Secretary of State for Health and Social Care [2021] EWHC 682 (Admin) was which local authority – Worcestershire or Swindon – should pay for the after-care services which had been provided to JG following her discharge from her second period of detention on 12 November 2015 and, subsequently, from hospital.

The Secretary of State had advanced a new interpretation of s. 117, which differed significantly from his own guidance. Mr Justice Linden rejected that approach. See: Section 117 After-care and Ordinary Residence – Lee Parkhill’s analysis of the High Court ruling in the Worcestershire case.

The Department of Health and Social Care revealed it had been given permission to appeal in an updated version of its statutory guidance on its position on the determination of ordinary residence disputes pending the outcome of the Worcestershire case.

The updated guidance reads as follows:

Ordinary residence disputes raising similar issues to those in the Worcestershire case will continue to be stayed until we have final clarification as to the correct approach to ordinary residence for the purposes of section 117(3) of the Mental Health Act 1983.

This note sets out the Department of Health and Social Care’s (DHSC’s) position in regard to the determination of questions of ordinary residence for the purposes of section 117(3) of the Mental Health Act 1983 that have been referred to the Secretary of State under section 40 of the Care Act 2014.

This note is to be read alongside DHSC’s guidance to local authorities on ordinary residence in chapter 19 of the care and support statutory guidance. It is intended to clarify the status of that guidance in light of the Worcestershire case, but nothing in this note is to be read as constituting legal guidance to local authorities. Nor does this note provide legal advice by, or on behalf, of DHSC in respect of the matters covered by the note.

Instead, in the usual way it is for local authorities to take decisions as to the appropriate course of action in the discharge of their functions under section 117 of the Mental Health Act 1983, taking their own legal advice as necessary.

In very broad terms, the central issue in the Worcestershire case is the proper approach to the determination of ordinary residence for the purposes of section 117(3) of the Mental Health Act 1983 where a person has been detained in hospital for treatment on more than one occasion.

The Secretary of State for Health and Social Care has published 8 determinations on this issue, including ‘Ordinary residence 7: 2020’, which is the subject of the Worcestershire case.

These determinations set out the Secretary of State’s position which has been revised to take account of the decision of the Supreme Court in R (Cornwall Council) v Secretary of State for Health [2015] UKSC 46.

The intention is to publish revised guidance once the outcome of the Worcestershire case has been decided.

DHSC therefore considers it to be in the interests of good administration, certainty and consistency to decide disputes on matters which raise similar issues to the Worcestershire case once it has final clarification as to the correct approach to ordinary residence for the purposes of section 117(3) of the Mental Health Act 1983.

Consequently, in the absence of exceptional circumstances in a particular case, no new determinations will be made on cases which raise similar issues after 2 June 2020, until the outcome of the case is known.

In the absence of a prescribed time limit for the determination of a question as to ordinary residence under section 40 of the Care Act 2014, the determination falls to be made within a reasonable time. An assessment of what is reasonable for these purposes must be made in light of all the relevant circumstances. In DHSC’s view, where new disputes raise similar issues to those in the Worcestershire case, it is reasonable to determine those disputes once the outcome of the Worcestershire case is known.

As the concept of ordinary residence serves as a mechanism for apportioning responsibility between authorities for the provision of aftercare services under section 117 of the Mental Health Act 1983 and given that the statutory framework provides a mechanism for the recovery of expenditure between authorities (as to which please see further below), DHSC does not consider a stay to be prejudicial to the parties generally, subject to consideration of exceptional circumstances in a particular case.

By virtue of regulation 3(7) of the Care and Support (Disputes between Local Authorities) Regulations 2014/2829 disputes must still be referred to the Secretary of State if the local authorities in dispute cannot resolve the dispute within 4 months of the date on which it arose. On receipt of a referral, DHSC will consider, on a case-by-case basis whether the case raises issues similar to the Worcestershire case and, depending on that consideration, how to treat that referral.

Section 41 of the Care Act 2014, read alongside section 117(4) of the Mental Health Act 1983, allows for expenditure borne by a local authority in the provision of section 117 after-care, for a person ordinarily resident in the area of another local authority, to be recoverable from that other authority.

Authorities are advised to seek their own legal advice as to the implications of section 69 in circumstances where a stay applies to a case they have referred to the Secretary of State for determination, for example whether it is advisable to seek protective proceedings in the county court in respect of their position under section 69.

Which local authority pays for aftercare after repeated detentions? 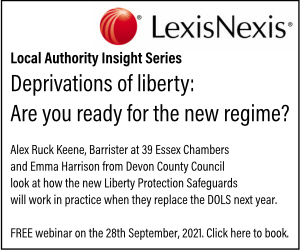