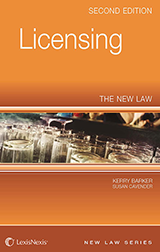 The second edition of this popular guide has been extensively revised and updated to provide complete coverage of the new regime which came into force in November 2005, with references to the final version of the Secretary of State's guidance. It covers the application and regulation of licences, and sections of the book dealing with local authority decision making now include the new laws on the Code of Conduct for councillors.

The authors, both practitioners and specialists in this area, give a clear and coherent account of the new regime and explain its implications for licensing practice. They address the practical issues and problems surrounding the Act, including those which have become apparent during the lead up to the implementation of the legislation. The book reproduces the Act in full, together with all the regulations and guidance.

Housing Allocation and Homelessness Law and Practice sets out the legal obligations of local housing authorities when allocating social housing and assisting those who are homeless. Jennifer Phillips… Read more...