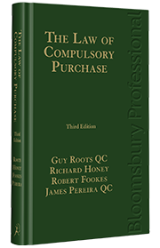 This is the Third Edition of a highly regarded work first published in 2008. It brings the law up to date to include major changes made by the Localism Act 2011, the Housing and Planning Act 2016 and the Neighbourhood Planning Act 2017 in addition to noting the decisions of the Upper Tribunal (Lands Chamber), the Court of Appeal and the Supreme Court since the Second Edition was published in 2011.

In a Foreword by Lord Carnwath CVO, he describes this work as “indispensable”, he notes that the changes to the Land Compensation Act 1961 made by the Localism Act 2011, the Housing and Planning Act 2016 and the Neighbourhood Planning Act 2017 taken together have enacted the majority of the recommendations of the Law Commission (when he was its Chairman) but without the comprehensive approach which the commission had advocated. He expresses the view that, as a result, there is continuing and if anything even greater need for expert legal guidance as to the interaction of the different strands of legislation and case-law. He says that the editors of this work between them have an unrivalled fund of practical knowledge and experience in this field, and he expresses confidence that this work will remain the leading guide for professionals and lay people attempting to make sense of this vital area of the law.

The book is intended principally for use by practitioners in the field of compulsory purchase and compensation, including lawyers, surveyors and valuers, but the structure, style and indexing are intended to make it accessible to occasional users and students.