The President of the Family Division has issued new guidance on remedying breaches of the Adoption Agency Regulations 2005. Jess Purchase sets out the key points.

Last month finally saw the handing down of the President’s judgment in the snappily-named case of Somerset County Council v NHS Somerset Clinical Commissioning Group and Others [2022] EWFC 31, which gives further guidance following the 2021 Somerset decision of Mrs Justice Roberts. For a 3-minute explanation of the original Somerset decision and the Adoption Agency Regulations 2005 [‘AAR’], read Lisa Edmunds’ article here.

Are declarations of lawfulness needed for existing orders?

The short answer is no.

Although Mrs Justice Roberts granted declaratory relief in relation to the primary cohort of 10 children, there remained a wider cohort that the local authority had not yet made Part 18 applications for. By the time of the final hearing, the parties had essentially agreed that the issue should not be dealt with under FPR 2010, Part 18, and SCC had conceded that the applications it had made for declaratory relief in relation to the wide cohort of children should be dismissed. The President accepted the position, stating that

“all court orders are valid and enforceable unless and until a court sets them aside. There is, therefore, no need for an application to be made under FPR 10, Part 18 seeking a declaration that existing orders are valid … Placement orders or adoption orders that have been made, but have not been set aside or varied by the court, are therefore valid and do not require further validation by a declaration or other means.”

But can an existing Placement or Adoption order be vulnerable to challenge if AAR 2005 has been breached?

The discussion of this question was a little more nuanced. The President (and other parties) accepted the statement of law as set out by the Secretary of State for Education, which can be summarised as follows:

The President concluded that “a placement order or adoption order made in circumstances where there has been a breach by the adoption agency of the medical requirements of the AAR 2005 is not in consequence void. At its highest, it will, applying the approach of the Court of Appeal in Re F (Infants), be voidable and subject to challenge by way of appeal on the facts of any specific case.”

In relation to setting aside placement orders on appeal, the President has emphasised that any appeal is against the decision of the lower court to make the placement order. The challenge therefore could not be on the basis that the placement order was void as a result of the breach of the AAR 2005. Although it was argued that Re B (Placement Order) [2008] EWCA 835 may compel the court to set aside a placement order, this was not accepted and the President warned against potential dangers of Re B having universal application.

In terms of what local authorities need to do with cases that are or are soon to be before the court, the conclusions are summarised in the flowchart below: 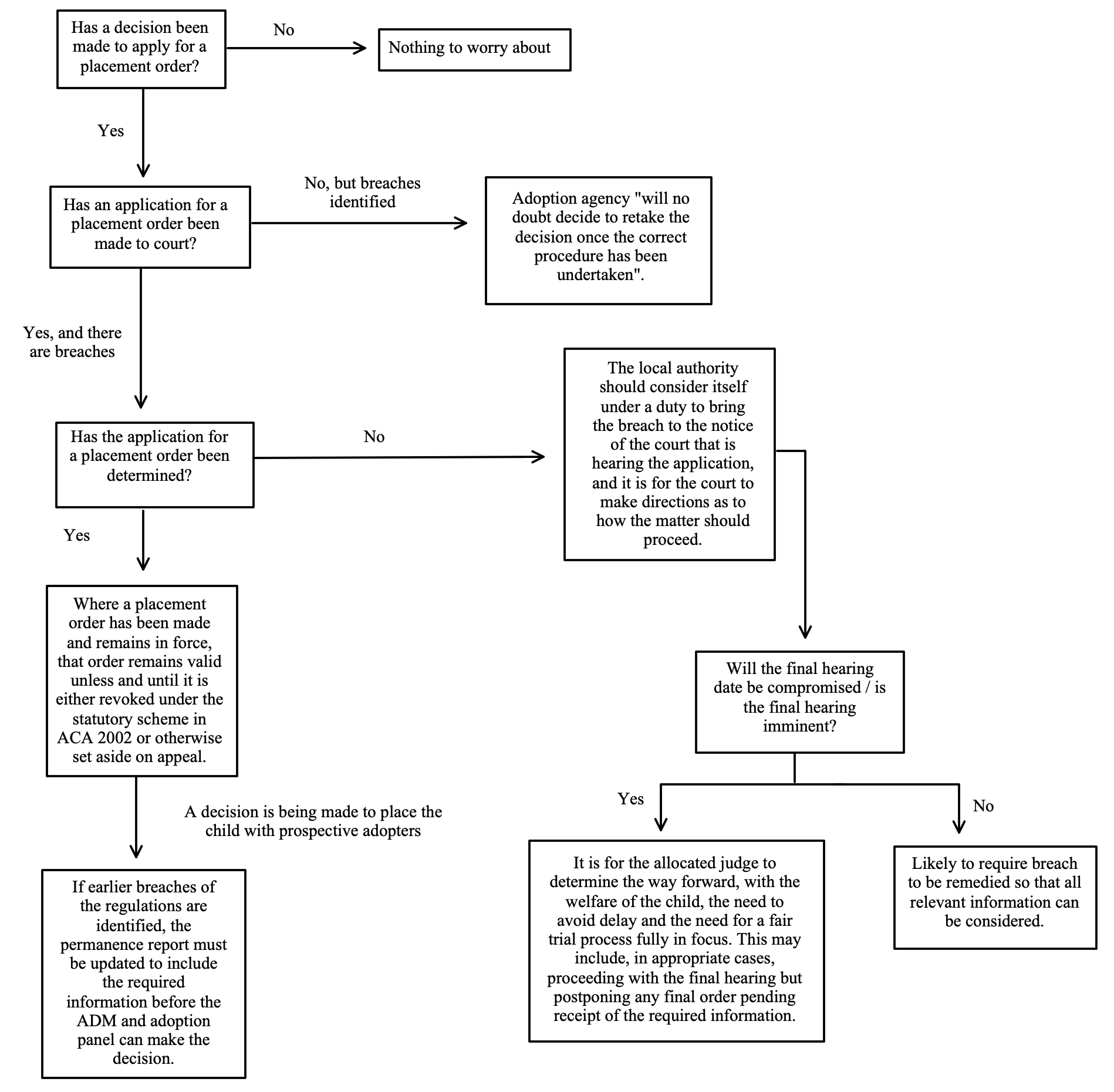 Jess Purchase is a consultant barrister at Unit Chambers.

Parents with autism in children proceedings

Adoption Law: A Practical Guide seeks to provide a comprehensive guide to the law, practice and procedure for professionals as well as those who are concerned with or involved in the adoption process.

Crown and Government Land: Prerogative, Statute and Common Law is an indispensable reference work for anyone interested in this complex area of law.

Setting out the practice, procedure, policy and compensation provisions applying to a compulsory purchase, this new edition is updated to include all relevant case law, legislation, policy and guidance since the third edition.